How Privatized Healthcare is Just Universal Healthcare That's Ripping You Off

The following post essentially represents a series of observations regarding the current healthcare system in the United States that have manifested themselves within my deep psyche. I don't pretend to be a medical professional, but then again it doesn't take one to note the ins and outs of an economic powerhouse from the outside. This post is not comprehensive, nor should it be seen as an attempt at a hint at policy building of any kind; I don't pretend to be a politician either.

In figure 1-1, the following phenomena is displayed: 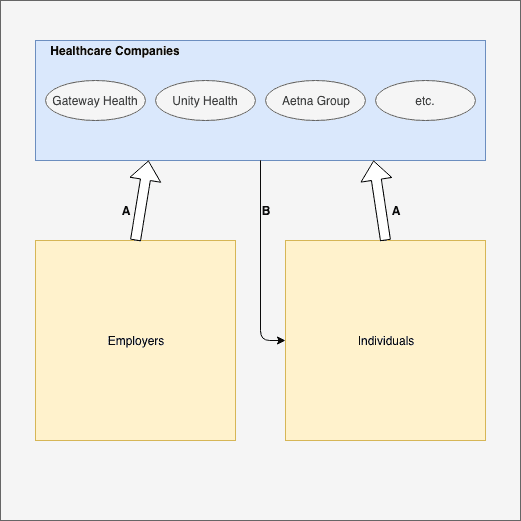 Think with me here: at a very high level, the private healthcare system is a black box whose input is cash and whose output is far less cash. It's a highly profitable entity whose revenue is directly attributed to the statistics that only a minute few of the participating "customers" will require services that cost more than their individual contribution to the revenue.

Whom does it benefit?

From the surface, it seems that the primary beneficiaries (yes, pun intended) of a system like the one described above are as follows:

Whom does it hurt?

I'm hard-pressed to believe that the current healthcare system in the United States is not the bi-product of decades of collusion amongst ever-growing entities, the creation of overly-complicated bureaucratic documentation dumped on consumers and a gaming of the current political system. Anyone who can agree with the simplistic, albeit accurate, high-level description of today's system given above should be able to understand my next point. If health insurance providers form a giant entity that collectively represents a pool of money to be used for the greater good of the people that buy into it (that number of people always being statistically the minority of said people mind you) then would it not make sense to eliminate the abstraction of this service across a number of entities and allow for a centralized system to dictate the payout of healthcare needs?

Yes, I understand that the current system we endure caters to a nicely structured micro-economy. The market dictates which insurance providers thrive, stick around, and do their job. I'm not suggesting that we abolish capitalism and centralize everything that happens to be involved with the greater good of the population. What I am suggesting is that within the context of healthcare, this micro-economy has grown to a size such that the job I just mentioned is now ill-defined. Allowing the market to dictate the cost of healthcare is doing nothing but constantly shifting the priority of insurance providers - from providing healthcare costs to the needy - to optimizing profits at all costs.

All information provided above is editorial content provided by yours truly. Any URLs provided are to sources I find somewhat credible and reparable.

For the record, I came across many sources that were defending the giant conglomerates we let dictate our healthcare options and decisions. The most compelling I found is this piece by a site called Very Well Health, and perhaps it's no coincidence that it's often healthcare-related organizations that seem to defend insurance agencies the most.